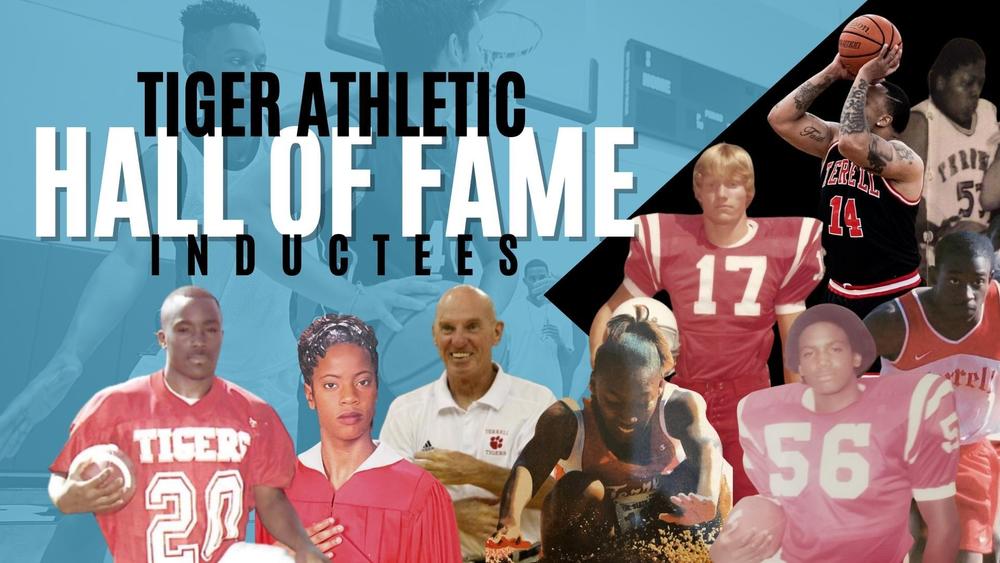 Jimmy Padgett Brewster graduated from Terrell High School in 1960 where he was a member of the football team. After high school, Jimmy enlisted in the United States Air Force and served for four years. In 1966, he enrolled at Cisco Junior College and began his college football career. Brewster played in two Wool Bowl games in Roswell, New Mexico and was named to the Junior College All-American Team. In 1968, he joined the North Texas State Eagles and was named All-Conference Team Honorable Mention his second year. His most memorable moments involved battling against his teammate and future NFL Hall of Famer, Mean Joe Greene. In his later years, Jimmy battled against Multiple Sclerosis until his untimely passing in 1988.

Bervin Brown graduated from Terrell High School in 1982 where he played basketball, football, and track. After high school, Brown enrolled at the University of Texas at Arlington to pursue a degree in Finance; and, upon graduation went to work for Fidelity Investments. He later went on to serve nine years with the Fellowship of Christian Athletes before entering the world of coaching where he has been for the last twenty years. Coach Brown has coached boys and girls basketball, boys and girls track, and golf in Terrell, Dallas, Edgewood, Gainesville, Waco and currently, Tyler. He has coached over a hundred state and regional qualifiers and earned multiple recognitions such as District Coach of the Year at Lincoln High School.

Tarren Dabney graduated from Terrell High School in 1999 where she played volleyball, basketball, and track. An exceptional athlete, she was a state qualifier each year of her high school career. While she excelled in sports, she also had a heart for service. Dabney would volunteer to style young girls’ hair who could not afford to pay for the service. During her senior year, Dabney was named Most Valuable Player in both basketball and track.

Chad Jobe graduated from Terrell High School in 2001 where he played football, basketball, and track. During his freshman year, Chad scored 11 touchdowns, and for the first time in 14 years, the Freshman Tigers earned the district title. During his sophomore year, he rushed for 1,046 yards and scored 20 touchdowns.  Jobe advanced to Regionals in track, was named 1st Team All-District, Outstanding Offensive Back of the Year, and earned the THS Distinguished Service Award his Junior year.  During his senior year he was the leading rusher in District 15-4A. After graduating high school, Jobe attended Tyler Junior College and volunteered with the North Texas Longhorn Track and Field Club of Terrell.  Mr. Jobe passed away in August 2020.

Jarrod McCullar graduated from Terrell High School in 2005 where he was elected student body president, played basketball and football, ran track and was a member of the powerlifting team. During his Junior year as team captain of the track team, McCullar and the relay team had the second fastest recorded high school time in the nation.  Jarrod attended New Mexico State University, Texas A&M University-Commerce, and Concordia University-Texas. He has served as a coach and teacher at Forbes Middle School in Georgetown, at Coyle Middle School in Rowlett and Marietta Middle School in Marietta Georgia. Outside the classroom and off the field, he served as a Youth Choir Director for Bethlehem Baptist Church and founded 42 Generations of Excellence, LLC Sports Mentoring Organization. He and his wife Leticia were honored by the Georgetown Cultural Citizen Memorial Association for their work in the Georgetown Community and surrounding area as Mentors and Teachers in 2017. McCullar currently serves as a Biblical Content Creator and Minister for ZMR Ministries in Atlanta, Georgia. Together with his college sweetheart, Leticia, they share five adorable children, Noah, Ethan, Olivia, Riley and Aaron and reside in Marietta, Georgia.

DaVeida Pierson graduated from Terrell High School in 1997 where she was an outstanding member of the track team. Pierson was a regional qualifier and received “high point individual” honors during multiple track meets.  She received the track and field Most Valuable Player award three years in a row, was named a “Who’s Who Athlete” in Texas two years in a row and was honored by the Texas Girls Coaches Association as an “All-Star Athlete” two years in a row. After graduating high school she attended the University of North Texas and now gives her love, time and so much of herself to students in Terrell ISD as a teacher and school counselor. Pierson is also known to volunteer her time coaching younger youth.

Antwian Thomas graduated from Terrell High School in 2008 where he played basketball. As a freshman he was a member of the varsity team.  During his sophomore year, he led the Tigers with 18.6 points per game, was the 5th best scorer in the Dallas-Fort Worth metroplex for a 4A school district and led the Tigers to the third round of the playoffs.  As a junior he averaged 21.4 points per game and he set the school record with 61 points in a playoff game. As a senior, he ranked third in the nation in 3-pointers made and was ranked first in Texas. He currently holds the Texas High school state record for 16 made 3-pointers in one game. After high school, Thomas attended and played basketball for South Plains College where he led the NJCAA in 3 pointers with 46% accuracy. He currently coaches youth athletics in Terrell and assists with the Alumni Games for the Terrell community

Steven Monty Westbrook graduated from Terrell High School in 1982 where he played varsity baseball all four years of high school as well varsity football his sophomore through senior year. As a sophomore he played linebacker and was a placekicker before being named the quarterback his junior and senior year. Westbrook was twice named to the Dallas Times Herald Honor Roll and was named a Dallas Morning News High School Star. After high school, Westbrook attended and graduated from Texas A&M and went on to a 35-year career in construction. Westbrook is a dedicated supporter of Terrell ISD and the City of Terrell and currently serves as the Vice President of the Terrell ISD School Board.

Congratulations to this year’s Tiger Athletic Hall of Fame inductees.