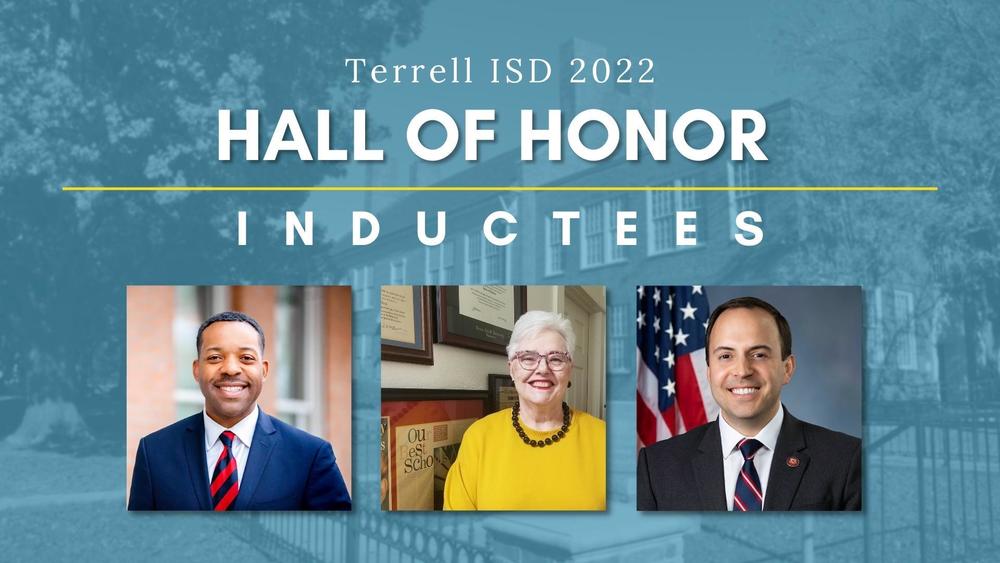 Three Terrell Tigers to be Inducted into the Hall of Honor

Terrell ISD is proud to announce the 2022 Terrell ISD Hall of Honor inductees, the Honorable Shelton Gibbs, the Honorable Lance Gooden, and Dr. Beverly Burr. The Hall of Honor was initiated in 2021 with Bernard Derrick as the first member to be inducted. The Hall of Honor recognizes Terrell High School or Burnett High School alumni who have demonstrated outstanding achievement in the arts, athletics, or academic activities that have made a positive impact on the community.

Shelton T.W. Gibbs IV graduated from Terrell High School in 1998. During high school, Gibbs was both an athlete and a scholar.  He played varsity basketball and ran cross country and earned the T-Award. He was a member of the National Honor Society, Student Council, Culture Club, and served as a Tigerette BodyGuard and DARE role model. Gibbs was a Boys State representative, was named Best All Around for his senior class, and graduated in the top ten percent of his class.

In the fall of 2002, Gibbs was admitted to Southern Methodist University’s Dedman School of Law. While in law school he served as a legal intern for Belo Corporation, a media conglomerate headquartered in Dallas, Texas. He worked in the legal department with Belo executives on projects for its 20 subsidiary television and print companies, including WFAA-TV Channel 8, The Dallas Morning News in Dallas/Fort Worth, KHOU-TV in Houston, KING-TV in Seattle/Tacoma, and KTVK-TV in Phoenix.

In June 2007, Gibbs was hired as Assistant District Attorney for Kaufman County. During his 13-year tenure as a prosecutor, Gibbs served as the Chief Felony Prosecutor for the 86th District Court and tried more than 60 jury trials to a verdict.

Gibbs was elected Judge of the 422nd District Court on July 14, 2020, and was sworn in on January 1, 2021, as Kaufman County’s first African American district judge.

Gibbs has participated in planning annual seminars for the Texas District & County Attorneys Association (TDCAA) training committee in Austin, Texas. He also conducted prosecutor training for TDCAA and key personnel throughout the state. He currently serves on the board of trustees for Abilene Christian University, is a board member of the Terrell Excellence Foundation, Senior Connect, and has previously served as a board member for the Crandall ISD Education Foundation from 2014 – 2016.

Gibbs was born into a legacy of Church of Christ ministers and currently serves as the pulpit minister of Lawrence and Marder Street Church of Christ, where he has worked since 2012. He has been a guest speaker for many churches throughout the United States and has participated in lectureships, panel discussions, and inspirational talks. Gibbs is married to Toni Francine Gibbs and is the proud father of three children, Shelton Gibbs V, Hamilton Gibbs, and Linden Gibbs.

Lance Gooden graduated from Terrell High School as a member of the class of 2001. During high school, Gooden was both an athlete and a scholar. He played football and golf and earned the T-Award. While in high school, he was a member of the Student Government Association, Fellowship of Christian Athletes, Student Council, National Honor Society and Presidential Classroom. Gooden was a Boys State representative, was chosen for the HOBY Leadership Award, was voted junior and senior class president and was a member of Who's Who.

After high school, he attended and graduated from the University of Texas at Austin.  Gooden served three terms in the Texas House of Representatives and spent 10 years working as an insurance broker and risk management consultant. He now serves as the United States Congressman for Texas's 5th District which stretches from Dallas County to Cherokee, Henderson, Kaufman, Anderson, Van Zandt, and Wood Counties. Congressman Gooden is a member of the House Committee on Financial Services where he serves as the Vice Ranking Member on the Housing, Community Development, and Insurance Subcommittee.

Gooden and his wife, Alexa, live in Terrell with their one-year-old son Liam. They attend Rockwall & Brin Church of Christ.

Dr. Beverly Burr graduated from Terrell High School as a member of the class of 1970. During her high school career, she was a member of the National Honor Society, band, Student Council, Typing Club, and Counselor's Office and graduated in the top ten percent of her class.

After graduating high school, she attended East Texas State University where she graduated with honors and then earned her doctorate at Texas A&M Commerce, also with honors.

Dr. Burr served Terrell ISD as a teacher, special education teacher, assistant principal, principal, special populations director, curriculum director, and Assistant Superintendent. While serving as principal of John F. Kennedy Elementary, the campus became the first “Recognized” campus in the district and was named a Four Star Campus by Texas Monthly Magazine for closing the achievement gap. As Assistant Superintendent, she was the first female named to that role in Terrell ISD.

Outside of Terrell ISD, Dr. Burr served as an Adjunct Professor, Educational Consultant, and Professional Service Provider with T.E.A.  She also volunteered her time as a pianist and organist at First Baptist Church Terrell. Burr was a member of the Terrell Chamber of Commerce, co-founder of the Small Business Organization to promote retail business in Terrell, and a member of The Social Science Club of Terrell.

Congratulations to this year’s Hall of Honor inductees.