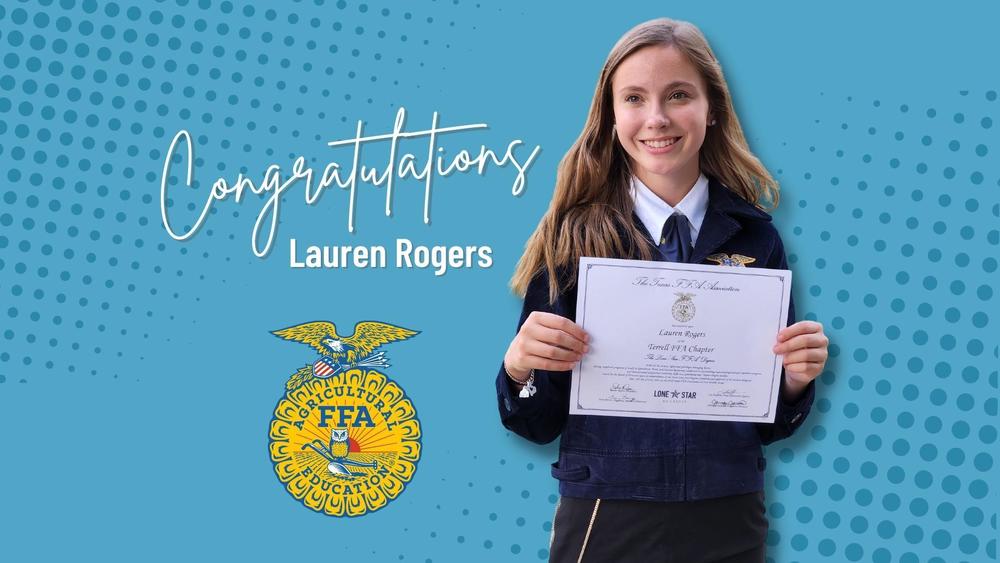 Lauren Rogers’ day begins at 5:00 AM. By 6:30 AM she arrives at the Terrell High School Ag Barn to care for and feed her show steer before heading to class at 7:30 AM.  After school, she heads back to the barn where she cleans stalls, walks her steer, and practices for an upcoming show.  A typical day for Lauren ends at 10:00 PM after she has dinner with her family and completes her homework. But, in the mind of Lauren Rogers, she would not have it any other way.

Lauren, a four-year member of the Terrell High School Future Farmers of America (FFA) program, said she fell in love with showing thanks to her four brothers.  “My brother, Casey, started showing when he was in high school and I would attend his shows as a little girl and I just fell in love with it,” said Lauren.

At ten years old she became a member of the Junior FFA and showed her first lamb.  From there, her show career took off. Throughout the years, she has shown rabbits, dairy cows, zebu cows and her favorite, a steer named “Patches.”

When Lauren entered high school she had the opportunity to attend her first state FFA convention. While there she noticed members wearing chains on their FFA jackets.  Thinking she could purchase the chain, she inquired where they could be bought and was immediately told the chain was given only to those who had earned their Lone Star Degree.  Lauren remembers thinking to herself, “If I can only get that I would feel so accomplished.”

Keeping this goal in mind, Lauren worked diligently for the next three years and earned numerous banners and belt buckles and has received both Grand Champion and Reserve Grand Champion honors.  In 2019, she was the overall champion at the State Fair of Texas where she showed a zebu heifer. Lauren has also served in various leadership positions at both the local and district level and this year will serve as President of the Terrell High School FFA program.

Each year she kept a stellar record book, earned her “Chapter Degree” her sophomore year and honored her community through various community service projects, all requirements to earn the Lone Star FFA degree.

This past month at the 94th Annual Texas FFA Convention, Lauren Rogers walked across the stage and received her Lone Star FFA degree - the highest honor an FFA member can receive.  The young freshman girl who once said to herself “you know what, I am gonna get that degree,” not only achieved her goal but also fell in love with caring for animals in the process.